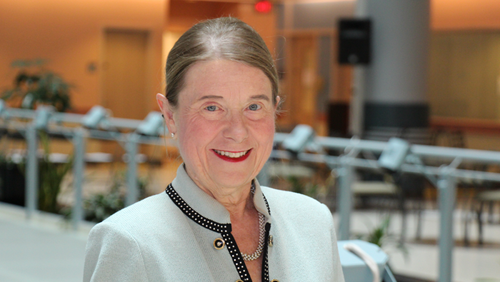 U of T Medicine Professor Frances Shepherd — an innovator in the study and treatment of lung cancer — has won the 2018 Canada Gairdner Wightman Award for outstanding career leadership in medicine and medical science.

A medical oncologist, Dr. Shepherd has been instrumental in designing and conducting research studies evaluating new targeted medications and anti-angiogenesis agents in lung cancer. She has undertaken many translational research studies in this field, and developed several large international randomized trials for some of the novel molecular anti-cancer agents. Dr. Shepherd is a professor in the Department of Medicine, Scott Taylor Chair in Lung Cancer Research and senior staff physician at the Princess Margaret Cancer Centre.

“The Gairdner Wightman Award underscores Professor Shepherd’s stature as a leading global clinician-scientist,” said Dean Trevor Young. “She brings skillful collaboration and rigorous methodology to her clinical trial development, and the results have led to greater treatment options and outcomes for people with advanced lung cancer.”

“Dr. Shepherd’s work has transformed the way that we think about lung cancer and the way that the world treats lung cancer,” said Dr. Bradly Wouters, executive vice president, science and research, University Health Network. “I am thrilled to hear that she has been recognized with this prestigious award. She is extremely deserving and has been a force in Canadian science for decades.”

Dr. Shepherd earned her MD from U of T in 1970. She has been co-investigator or principal investigator on more than 100 trials and served as Chair of the Lung Cancer Committee of the National Cancer Institute of Canada Clinical Trials Group. She was instrumental in the creation of NCIC trial-associated Lung Cancer Tumour Banks, which contain both cancerous and normal lung samples, a critical resource for further understanding the molecular abnormalities of lung cancers.

The Canada Gairdner Award announcement was made this morning at the Toronto Reference Library. Read more about the other laureates here.

This year’s awardees will be celebrated at an annual black-tie gala in October.